Thirteen Ways of Looking at Fire 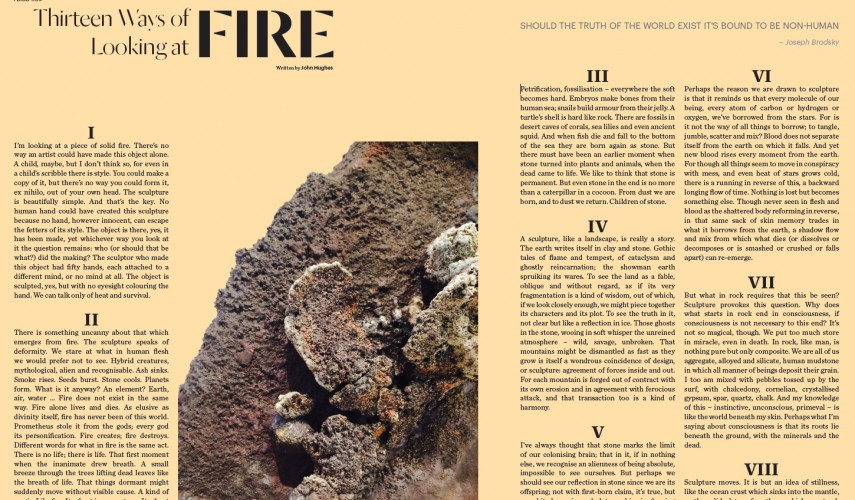 I
I’m looking at a piece of solid fire. There’s no way an artist could have made this object alone. A child, maybe, but I don’t think so, for even in a child’s scribble there is style. You could make a copy of it, but there’s no way you could form it, ex nihilo, out of your own head. The sculpture is beautifully simple. And that’s the key. No human hand could have created this sculpture because no hand, however innocent, can escape the fetters of its style. The object is there, yes, it has been made, yet whichever way you look at it the question remains: who (or should that be what?) did the making? The sculptor who made this object had fifty hands, each attached to a different mind, or no mind at all. The object is sculpted, yes, but with no eyesight colouring the hand. We can talk only of heat and survival.

II
There is something uncanny about that which emerges from fire. The sculpture speaks of deformity. We stare at what in human flesh we would prefer not to see. Hybrid creatures, mythological, alien and recognisable. Ash sinks. Smoke rises. Seeds burst. Stone cools. Planets form. What is it anyway? An element? Earth, air, water… Fire does not exist in the same way. Fire alone lives and dies. As elusive as divinity itself, fire has never been of this world. Prometheus stole it from the gods; every god its personification. Fire creates; fire destroys. Different words for what in fire is the same act. There is no life; there is life. That first moment when the inanimate drew breath. A small breeze through the trees lifting dead leaves like the breath of life. That things dormant might suddenly move without visible cause. A kind of magic. Like fire. Its ghost in every stone. Its ghost in every lump of clay. This sculpture that seems found rather than made. Not fired in a kiln but in a cosmic rage. A comet, a meteorite, a fossil of flame. The stuff from which we are made. When we look at a sculpture the first thing we see is ourselves.

III
Petrification, fossilisation - everywhere the soft becomes hard. Embryos make bones from their human sea; snails build armour from their jelly. A turtle’s shell is hard like rock. There are fossils in desert caves of corals, sea lilies and even ancient squid. And when fish die and fall to the bottom of the sea they are born again as stone. But there must have been an earlier moment when stone turned into plants and animals, when the dead came to life. We like to think that stone is permanent. But even stone in the end is no more than a caterpillar in a cocoon. From dust we are born, and to dust we return. Children of stone.

IV
A sculpture, like a landscape, is really a story. The earth writes itself in clay and stone. Gothic tales of flame and tempest, of cataclysm and ghostly reincarnation; the showman earth spruiking its wares. To see the land as a fable, oblique and without regard, as if its very fragmentation is a kind of wisdom, out of which, if we look closely enough, we might piece together its characters and its plot. To see the truth in it, not clear but like a reflection in ice. Those ghosts in the stone, wooing in soft whisper the unreined atmosphere - wild, savage, unbroken. That mountains might be dismantled as fast as they grow is itself a wondrous coincidence of design, or sculpture: agreement of forces inside and out. For each mountain is forged out of contract with its own erosion and in agreement with ferocious attack, and that transaction too is a kind of harmony.