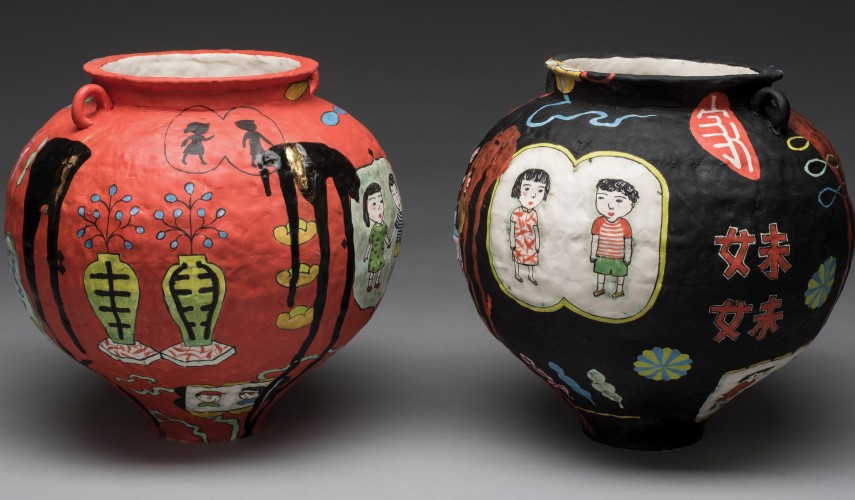 In the Flood We Hope Not to Drown: April D Felipe

As a first generation American, of Dominican and Puerto Rican decent, my work explores the complexities of navigating personal and cultural histories in service to the construct of ones identity.

In the Flood We Hope Not to Drown, was created through the use of collage. The two main materials used are porcelain and embroidery, creating an abundance of varied textures and collected marks. The layering aspect of collage allows me to hide and reveal information, much like real history, the information we cannot see is still there.

On the porcelain tile we see hands painted in underglaze reaching up from a sea of hair.

The use of hair relates to our personal histories, our experiences and that of our immediate family. In this sea of hair, I think about belonging to a mixed race culture, we are still trapped by anti-black and indigenous colonial ideals.

The hands are reaching out, trying not to be lost.

Patterned drips flow across the porcelain tile. These patterns reference historical faux tile floors from the Caribbean. These faux tile mosaics are a powerful symbol of colonialism, used as a way to showcase ones European lineage while distancing from ones African and Native lineage. However when we look at the history of these tile patterns it is revealed they are derivative of Moroccan tiles. I am drawn to the fact while striving toward colonial ideals; these tiles are actually representative of African histories.

Pre-Columbian Colombian ceramics remain a large influence in my work. My Colombian heritage and connection to an Amerindian ancestry that many Latin Americans share fuels my interest.

I have been using traditional Pre-Columbian methods, such as coil and pinch, to create double stirrup jars that are prominent to the Colombian region. With the combination of tradition and my contemporary figures I am storytelling our histories in a parallel way.

Using terracotta remains important in my work as I reference many aspects of Pre-Columbian ceramics. The terracotta also references the land of my country and mountains where the clay abundantly remains on the land we walked and continue to walk on. Gold is another material that is important in my work and is found in the same mountains and rivers where the terracotta lays. The gold was also abundant in Colombia and many historical pieces were made in gold. While gold held important symbolism, its value was not foremost to the Pre-Columbians. The juxtaposition of the terracotta and gold in my works aims to comment on the contrast of the materials. Terracotta is a material that is typically seen as inferior and being placed next to the gold that is found in the same land speaks to the significance that both materials played then and now.

My work in ceramics and mixed media revolves primarily around issues of family and my Asian-American background. Cultural marginality and blending, tradition vs. Westernization, language and translation are key elements in my work. Since the birth of my son in 1987, I have been drawing inspiration from major events in my family’s history, the day-to-day challenges of parenting, and my own childhood memories of being raised in a minority culture in the United States. I use the image of a child as a symbol of innocence, potential, vulnerability and play.

As I have grown older I think more and more about legacy and inheritance. In the piece Brothers and Sisters, I have replicated traditional Chinese vase forms, on which I have painted imagery representing the values and valuables that I would want to pass on to the next generation. I borrow visual vocabulary from Asian funerary papers, which depict items of physical and spiritual wealth, and are meant to be burned when a loved one dies, sending that wealth to the next life. I also reference Chinese export porcelains, which were often painted, somewhat redundantly, with elaborate vase forms in order to show off the wealth of the owner.

The Chinese like to make the vases in pairs, to give a formal symmetry to an indoor or outdoor space. I like the imprint of my fingers that is visible in coil building, so the vases are made using a cardboard silhouette template, so they can be very close to identical in form. The imagery is arranged loosely on the forms, giving the feeling of patterning without actual repetition.