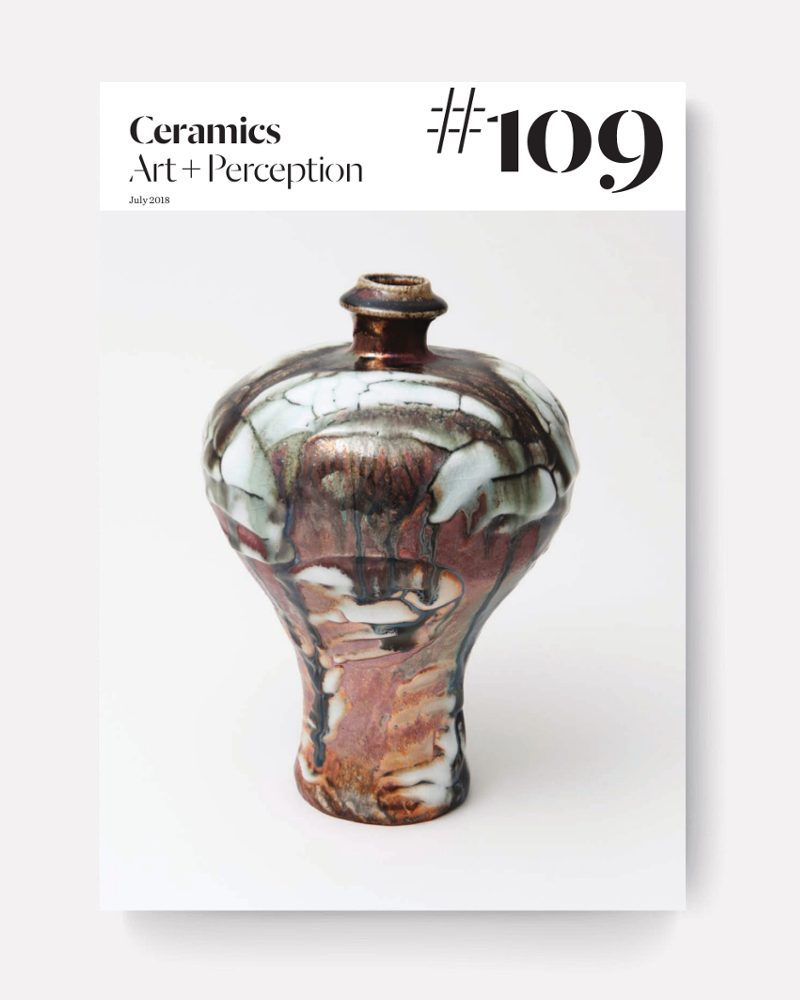 “…  although I   can  envision  …  what  I  think  will  occur  in  the  kiln,  it  is  impossible  to  see  inside  it,  therefore I  must  strive  beyond  to  find  what  I  am  seeking.  Yohen  (unpredictable  change)  occurs  within  the  limit  of  the  clay,  the  communication  between  me  and  the  kiln,  and  the  collaboration  of  the  pots  and  flame  within.  When Yohen occurs naturally within the anagama.
— Ken Matsuzaki: Looking for Shapes the Clay Deserves by Jack Troy

New  works  in  the  show  were  unfired  because  her  kiln  isn’t  working;  she  treated  that  not  as  a  limitation  but  as  an  opportunity  to  be  playful.
— Marie Woo Clay Odyssey: A Retrospective at Birmingham Bloomfield Art Centre by Janet Koplos

Cochiti  Pueblo  historic  clay  figures  were  destroyed  by  the  invaders  largely  due  to  accusations  of  witchcraft  and  sorcery.    These  clay  figures  provided  social  commentary  in  a  world  inundated  by  the  arrival
of  the  railroads  and  an  influx  of  “foreigners”  to  the  region.
— Virgil Ortiz writes about his work.

At  the  end  of  my  conversation  with  one  of  the  five  Italian  jurors,  when  I  pressed  about  the  disproportionate  number  of  Italians  in  the  exhibition,  he  reluctantly  said  that  it  was  political.
— Elaine Henry writes on Premio Faenza

We already know how ICE agents respond to Gonzalez, a fifth-generation American,  celebrated  artist  and  teacher,  respected  community  member,  beloved  husband,  father  and  grandfather,  while  eating  breakfast  at  home.  We  know  because  police  did  raid  the  family  home,  storming  the  door  and  rounding  up  two  grandparents  and  a  child  in  the  front  yard;  they  even  found  it  necessary  to  restrain  her  young  uncle  in  front  of  the  family,  all  in  a  case  of  mistaken  identity.
— ‘Telling’ Stories: Ray Gonzales at Axis Gallery by Susannah Israel

The  pottery  tradition  is  not  predominant  in  all  the  parts  of  Urhobo . However,  the  communities  that  are  known  for  this  art  practice,  are  largely  Ughevwughe,  Otor-  Edo,  Arhagba,  Egini,  Otutwama,  Ewu-Ame  and  Esaba.
— The Concept of Beauty in Urhobo Pottery by Dr Abamwa Oghenekevwe Elizabeth

Eliminating  the  functionality  of  pottery  inevitably  renders  a  pot  an  abstract  object,  estranged  from  its  sources  in  nature  and  history,  an  object  that  has  no  nature  outside  itself  and  is  no  longer  mediated  by  human action.
— Contemporary Ceramics and the Past by David Palmer

The  appeal  of  porcelain  and  jade  is  understandable  when  recognising  the  Chinese  concept  of  qi,  a  life  force  that  permeates  everything.  Their translucency arrests  light  drawing  one  to  their  interiority.  Porcelain seems to glow as if light emanates from within.  The  ‘shadow’  of  the  hand  that  holds  a  porcelain  bowl  is  mysterious  like  some  half  seen  figure  emerging  from  the  mist.
— Porcelain and River Mud: a Chinese Art Residency by Sebastian Blackie

The participatory performance of Remembering the  Empty Coolamons allows  the  public  to  pay  respect  to  the  Stolen  Generations  of  Australia,  within  a  context  devoid  of  blame,  shame,  and  guilt.  The  Stolen  Generations  refers  to  the  tens  of  thousands  of  Aboriginal  and  Torres  Strait  Islander  babies  and  children  forcibly  removed  from  their  families,  across  the  whole  of  Australia,  from  the  early  1900’s  to  1978.
— Remembering the Empty Coolamons by Robyne Latham

Although  I  wholeheartedly  embrace  the  advances  in  digital  technology,  I  do  not  lose sight  of  my  creativity  which  is  rooted  in  ceramic  craft  traditions.  I  consider  myself  a  ceramic  artist  who  celebrates  the  handmade  whilst  exploring  a  range  of  digital  creative  options,  seeking  new  possibilities  for  this  art  form.
— Drawing and Ceramics: Pioneering a Digital Solution by Eugene Hon

Grayson Perry RA, in his role of coordinator, encouraged artists  to  enter  work  by  issuing  this  statement:  “Fellow  artists!  2018  marks  the  250th  anniversary  of  the  Royal  Academy,  so  the  Summer  Exhibition  will  celebrate  a  quarter  of  a  millennia  of  artistic  innovation.”
— Turning the UK’s Royal Academy Summer Exhibition on it’s Head by Paul Bailey

Today’s  ceramic  artists  apply  their  skills  in  continually  new  and  exciting ways,  addressing  ideas  and  exploring  conceptual  concerns  in  ways  their  predecessors  could  never  have  imagined  and  people  are  paying  attention  to  this  evolution.
— Contained | Contenu: Volume Realised Through Glass and Clay by Frances McDonald

Working and living in London for 17 years exploring its vibrant multicultural energy, has changed me.  My  work  has  gradually  become  an  eclectic  mixture  of  elements,  the  result  of  a  meeting  of  the  past  with  present  reality;  of  Western  and  Eastern  culture.
— Aneta Regel writes about her work.

I  was  born  in  France  to  Beninese  parents  and  grew  up  in  the  Parisian  suburbs  where  people  come  from  all  over  the  world,  especially  from  France’s  ex-colonies  of  North  and  sub-Saharan  Africa.  Spending  my  childhood  in  this  melting  pot  of  different  cultures  was  a  gift  from France.
— King Houndekpinkou writes about his work

and much, much more! 160 pages of critical, creative and technical writing on contemporary ceramic art from around the world.