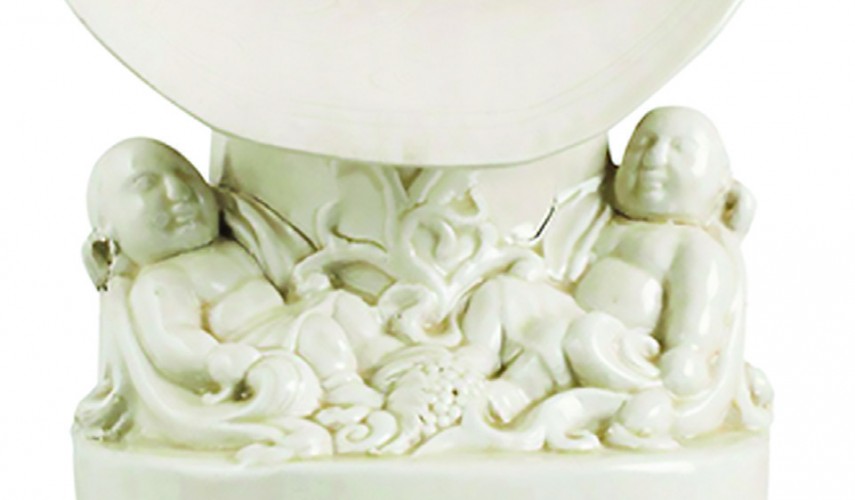 The Two Gods of He-He are also known as the Two Sages of Harmony and Union, a collective name of two prominent monks – Shide and Hanshan – who evolved into folk immortals who governed marital affairs and became the symbol of the Chinese Cupid. Its image is of one man holding a lotus flower while the other holds a round box in both hands. The lotus flower being held symbolizes ‘twin lotus flowers on one stalk’ and the box symbolizes ‘a good union’. This is because the homophonic word represents harmony, auspiciousness and happiness in Chinese, and is mostly used for representing a happy marital union. In Chinese ceramic art, people are impressed by the profound skills, rich colors and exquisite patterns. Studying the meaning behind the art of Chinese ceramic patterns provides great value for understanding ancient Chinese culture and social concepts. Among them, the Two Gods of He-He is a typical pattern, which was prevalent and played an important role for nine centuries in the Song, Yuan, Ming and Qing dynasties. It not only was a term used in Buddhist Halls, but was also used by scholars and as an encouragement for regular folk. Eventually, it evolved into a folk legend and became an object of worship, thus acquiring the identity designated by the imperator [emperor] in the Qing Dynasty, reaching the peak of consecration. The pattern of the Two Gods of He-He gradually evolved from a gaunt, Zen-like and mysterious figure, used in the beginning, to a beaming child. From ceramic statues to ceramic patterns, the Two Gods of He-He demonstrates Chinese traditional belief, their attitude to life, and their aesthetics. It is a product borne of a perfect combination between matter and spirit, and traditional cultural heritage.