EXTRACTS
Feminist theory, therefore, is more ‘like a tapestry of may threads and hues than one woven in a single colour’. This is also an apt metaphor for Ghada Amer and her artwork.
— Advocating what she lives: the art of Ghada Amer by Anthony Stellaco

Isobel Egan is a highly significant artist in the field of ceramics, not only in Ireland, but arguably on a global level.
— Isobel Egan Inside Out by Audrey Whitty

The potters, who are almost entirely women, are apprenticed as girls to their mothers.
— The Anonymous Traditional African Pottersby Victor M. Cassidy

It might evoke a time-lapse photo of a conductor tracing patterns in the air with his baton.
— Fujikasa Satoko’s Stoneware takes Flight by Janet Koplos

His life and legacy are undeniable, as was his care for the health of Ghanaian ceramic culture and its future.
— Standing on the Shoulders of Giants: Kingsley Kofi Broni by Kofi Adjei and Keaton Wynn

While Japan certainly has its tradition of memorable ghost stories, these baroque skeletal fragments might seem more connected to Goth styles except for their whiteness.
— Two Views: Japanese Kogei by Jan Castro

In the presence of Jenny Orchard’s creatures, you can’t help but imagine stories. Fables. A strange animal – a platypus. Her squat body, short splayed legs, rubbery mouth. Not a day goes by when she doesn’t see her reflection in the water and shudder. ‘I must be the ugliest creature in the world, she thinks.
— The Primeval Comic Book by John Hughes

It’s taken years to fill the studio with collected porcelain and discarded clay pipe fragments; these are the raw materials that feed my creative engine.
— Bricks and Bones: A sustainable practiceby Robert Harrison

I find troublesome and worrisome this focus on biography as necessary knowledge to access, appreciate and above all, analyse the work of Edmund De Wall.
— Reflections on Edmund De Waal’s Phaidon Monograph by Paul Mathieu

Chris Gustin and I are looking at a lidded jar I made from Laguna paper clay. Big enough to hold the cremains of all the potters and show organisers, it seems a bargain at $400.
— For Karen Karnes, Enabler by Jack Troy

The result is that over time the duende quietly slips out the back door of the studio.
— The Work of Russell Wrankle by Richard W. James

Subsequently, in the glaze firing, organic materials burn producing a gas which moves through the glaze layer, separating the over glaze colour and revealing a smooth surfaced round white spot in the glaze.
— Maiolica Glaze by Jeff Zamek

Here we scanned a number of objects for printing using a Next Engine 3D Scanner2 to scan a pawpaw fruit with impressive results.
— New Technologies for the Ceramic Studioby Anna Callouri Holcombe and Thomas Storey

Zhenrutang physically embodies much of how I, as a first time visitor, came to see China as a whole – a mixture of reverence for the historic, and a thirst for the practicality of the new.
— The Unifying Language of Clay in a Complicated World by Richard W. James

If digital technology is to have a healthy presence within ceramic research then it is vital that the methodology is not relegated to the novelty of an emerging technique.
— Digital Age Optimism by Adam Chau

When pushed to cite what architectural project he is especially proud of, De Jose mentions Gaudi’s Sagrada Familia rehabilitation, and the new building of the Lisboa’s Oceanarium.
— Ceramics and Architecture by Caterina Roma

The colouring technique of Ping Tu was crude and failed to add any sense of three-dimensionality to the objects. This meant the images drawn on amorial porcelain retained simplicity.
— Development History and Art Characteristics of Chinese Amorial Porcelainby Xue-Hui Li

Then it occurred to me: clay can do anything. Maybe, with clay, I could mimic the geometric shapes and colours of the precious marbles and stones inlaid into the decorative floors of ancient Venetian basilica’s and churches.
— Circles: only for my sister by Barbara Balzar 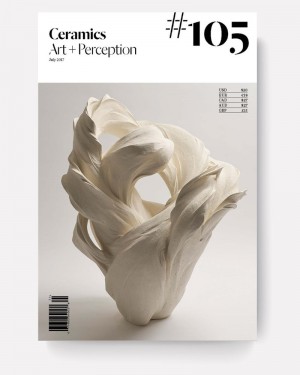