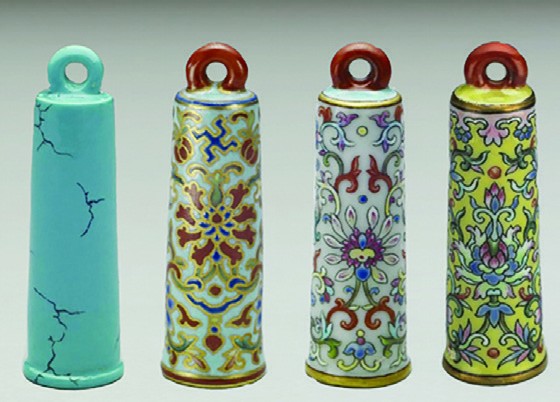 Chinese ceramic accessories originated in the Neolithic period; pottery bracelets of various shapes have been found in the archaeological sites of Banpo and Miaodigou. The pottery bracelets used to decorate ancestors have also been unearthed from the relics of Yangshao culture and Longshan culture. Obviously, the pottery bracelet is the original form of ceramic costume accessories. As the turning point for the development of ceramic costume accessories, the Song Dynasty showed great interest in producing imitation-jade bracelets, which were made from ceramic materials due to people’s preference for jade. Ceramic bracelets can be mistaken for jade ones since they were covered in a smooth glaze, which simulated the mild and bright texture of jade. After the imperial kilns were established in the early Qing dynasty, the Qianlong emperor played a vital role in shaping the exquisite style of the ceramic costume accessories of the Qing Dynasty.