Porcelain-made Lotus Shoes in the Qing Dynasty of China 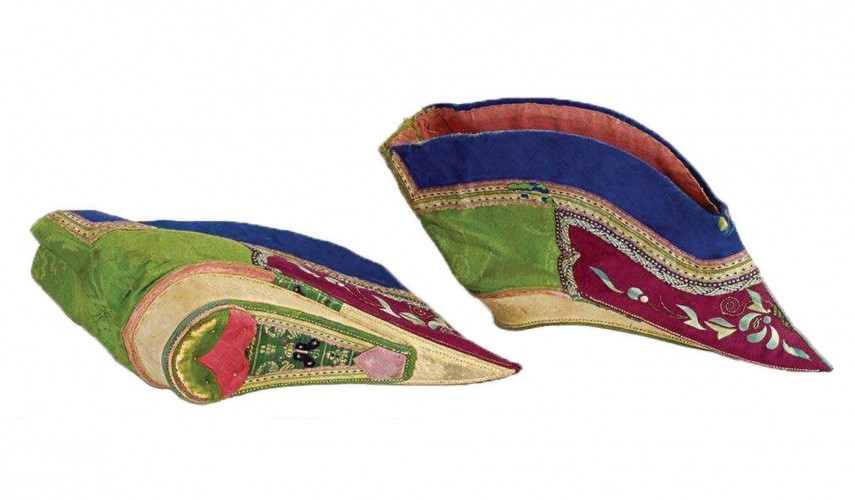 Wearing lotus shoes was a unique footwear style in ancient China worn by Han women. They were named lotus shoes as women’s tiny feet were likened to the golden lotus flower. These distorted feet were highly valued in ancient China and were thought to be linked to beauty, virtuousness, preciousness and auspiciousness. Foot-binding was a custom that encouraged wrapping up women's feet with cloth for the purpose of shaping them to be unnaturally small and sharp. It originated in the late Northern Song Dynasty, and grew in popularity during the Yuan and Ming Dynasties, before ultimately became generally accepted as the female fashion and aesthetic standard for the whole of society in the Qing Dynasty. It was also the golden age of Chinese ceramic development during which craft and art reached the highest level. Concurrently, porcelain was being used extensively and it became popular to replicate various daily rituals and traditions in porcelain, with a high level of realism. Porcelain-made lotus shoes began being made by imitating the embroidered shoes for the appreciation of male scholars. The shoes not only revealed the multiple ceramic techniques that were popular in the Qing Dynasty, but also exposed the spiritual and aesthetic appeal men had for the shoes (and the feet they produced) disassociating themselves from the plight of women who were objectified and oppressed in the patriarchal society.